Sign up by October 31 (while supplies last!) to start with Fruits of Fall—shipping the week of November 1! 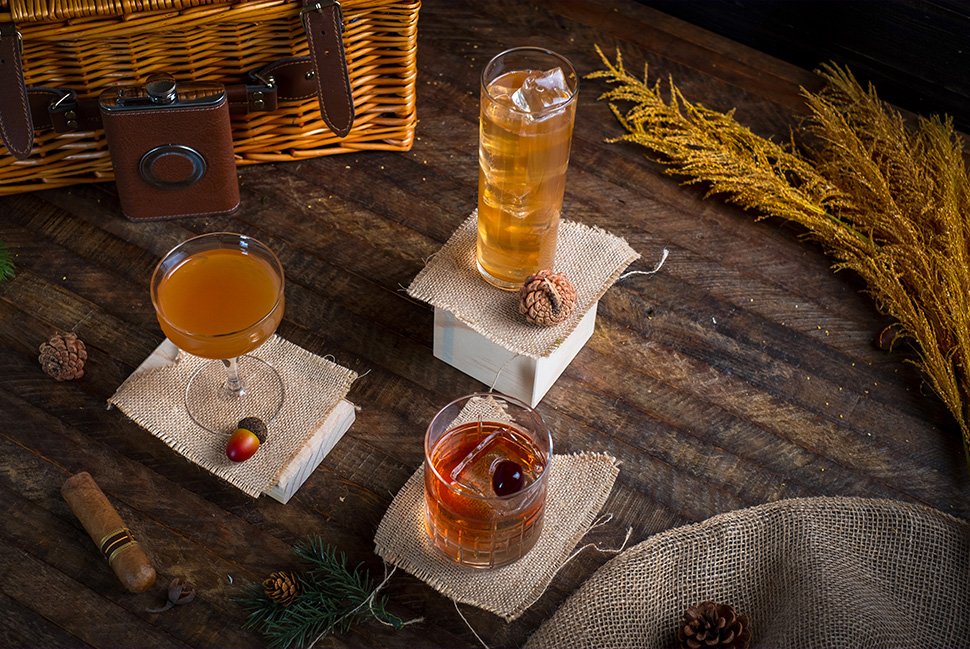 To Have on Hand for New Frontiers

Recommended liquor: American whiskey has been around for hundreds of years, usually broken up into the following categories: bourbon whiskey, rye whiskey, rye malt whiskey, malt whiskey, wheat whiskey, Tennessee whiskey, and corn whiskey. All these are made from mashes with at least 51% of their named grains. This month's box calls for "New" American whiskey, which distinguishes itself by being otherwise uncategorizable, created by distillers taking age-old distillation practices and putting their own spin on them, meticulously choosing uncommon and/or local ingredients, resurrecting long-lost blending techniques, and introducing new aging techniques.

So that you can start mixing your cocktails as soon as your box arrives, why not go get your bottle of American whiskey now? Each of this month's featured bartenders has a recommendation for you! Any of them will work for all three recipes found in this box, depending on your preference:

J. Rieger & Co. Kansas City Whiskey is a blend of straight bourbon whiskey, light corn whiskey, and straight rye whiskey, all aged at least four years, as well as a small amount of fifteen-year-old oloroso sherry from the Williams & Humbert Bodega in Jerez. Bottled at 92 proof, Reiger’s Kansas City Whiskey is a well-balanced, smooth, and slightly sweet blended whiskey. According to Andrew Olsen and Ryan Maybee, “It’s beautiful when served neat or on the rocks but also works well in classic bourbon or rye-based cocktails.”

Balcones Baby Blue adds a sophisticated twist to corn whiskey, and for Chelsea Santos, Balcones will always hold a special place in her heart. “They value authenticity, high-quality ingredients, and rich flavors,” she says. “Baby Blue is a blue corn whiskey and was the first Texas whiskey on the market since Prohibition. It's crafted from roasted heirloom blue corn and features tasting notes of vanilla, apricot, kettle corn, and leather spice. It'll always keep you coming back for more.”

Predominately a bourbon but with the spicy notes of rye, Blackened American Whiskey uses black brandy casks to finish in, lending an apricot note to the whiskey, or as Blackened says, “flavoring for adults.” But what Greg Mayer finds truly unique about this whiskey is “the awakening” process: Blackened blasts Metallica at the barrels to sonically age the whiskey by forcing more whiskey into the crevices of the barrel so that it picks up amazing wood notes!

Recommended amount: To make all 12 drinks, you'll need 20 oz of whiskey; a medium (750 ml) bottle will be your best bet.

Recommended barware: A few different jiggers that measure 1/4, 1/2, 3/4, 1 1/2, and 2 oz, as well as a strainer, shaker, mixing glass, bar spoon, citrus juicer or reamer, and fine strainer. These are not all strictly necessary, but will improve your mixology experience.

Recommended ice: To make all 12 cocktails in one go, you'll need about 4 pounds of ice (4 ice trays’ worth).

Fibonacci on the Fritz